What can a book on economics from the 1940’s (when Henry Hazlitt finished  “Economics in One Lesson”) teach us today, over 70 years later? A whole lot it turns out. History has a thing for repeating itself and we never seem to learn. Monetary policies are no exception. 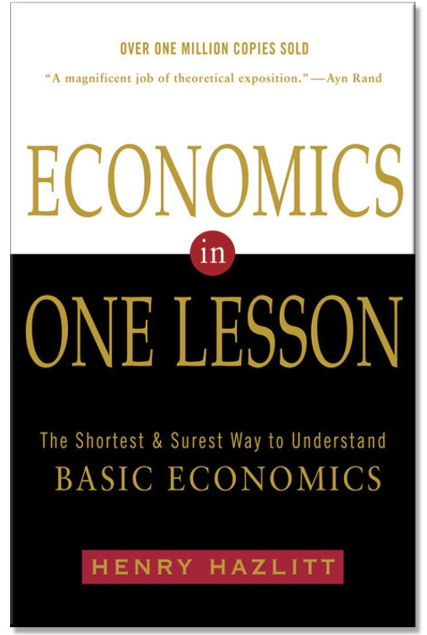 Henry Hazlitt was a journalist by trade and you can really feel it in the very fiber of the book’s text by how easy even the hardest concepts within “Economics in One Lesson” gets explained – Hazlitt has a real knack for boiling down hard macro economical concepts down to a softer, more digestible form.

He invites the reader to take a peek backstage with him, picking up topics and going through them with you, never bogging down in details or snobby academic terms. The book is written for a broad audience in mind and the goal is set from the very beginning:

“The object of this book is not to expose the special errors of particular writers, but economic errors in their most frequent, widespread or influential form.” – Henry Hazlitt

Hazlitt takes you through some very basic fallacies and misconceptions as a foundation and refers back to them throughout the book. The more you read, the more revealing the errors get – Especially in the form they are used today by governments.

I actually had to pause a few times and enjoy the “aha”-moments from reading as I internally went through all the monetary policies and rhetoric I had fresh in the memory bank from local news articles and pieced them together with what I just read.

One of my favorite things that Hazlitt underlines, and use repeatedly throughout the book, is how policymakers overlook secondary consequences of public economic policy – Something that is very important not to overlook because of the symbiotic nature all industries have on each other, down to the individual worker. Especially in an exchange economy. Hazlitt explains:

Mr. Hazlitt takes a look at the history of industrialization, from the days of Adam Smith all the way to the 1940’s,  how ‘technophobes’ has objected to machines “stealing jobs” and how unions, later on, use almost the same argument for adding additional workers to tasks made simpler through machinery to “save jobs”. Illustrated in a very comical and fitting way, Hazlitt writes:

“The technophobes, if they were logical and consistent, would have to dismiss all this progress and ingenuity as not only useless but vicious. Why should the freight be carried from New York to Chicago by railroads when we could employ enormously more men, for example, to carry it all on their backs?” – Henry Hazlitt

The effects machines have had on employment, well-being (increase in standard of living) and growth both in population and wealth is checked off by Hazlitt in “Economics in One Lesson”.

In the chapter called “Who’s ‘protected’ by Tariffs”, Hazlitt makes a truly well-thought-out effort to demystify everything surrounding fees on imports from foreign countries. It is the best piece of text I’ve read on this subject. Hazlitt goes through several effects o Tariffs: How it affects consumers, how it affects producers and society as a whole. That is a lot of ground covered in just a few pages!

Henry Hazlitt also takes a look on the closely connected concepts of parity of price, exports of goods and general protectionism in national industries – Neatly tying them together and show how similar in effect they are to each other in economic terms.

We are also taking a quick tour in the territory of minimum wages if unions actually raise wages and the interesting concept of purchasing power – The idea that if the worker cant purchase the product he or she creates, their wage is “unfair”.

Hazlitt also earns a gold star from me in this elegant explanation about profits:

“Profits, in short, resulting from relationships of costs to prices, not only tell us which goods it is most economical to make, but which are the most economical ways to make them” – Henry Hazlitt

“Economics in One Lesson” is a great read. If you are looking for a book that makes you feel smarter after you have finished the last page, this is the book you are looking for. High-caliber and packed page-to-page with a ton of knowledge, written by one of the fields best artistic writers.

GET YOURSELF A COPY: