Theodore Kaczynski, better known as the “Unabomber”, wrote his radical manifesto as a bargaining chip – “Publish this or I will continue sending bombs”, was his message. Using his written word as an alternative to wake people up, in his view, to what humanity has done to the environment and itself. Is it worth a read or is it just a string of words from a crazy guy in a cabin? 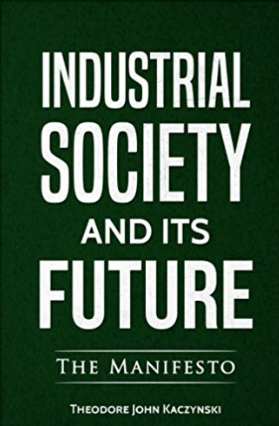 “This is not to be a POLITICAL revolution. Its object will be to overthrow not governments but the economic and technological basis of the present society.” – Theodore Kaczynski

With a very straightforward way to deliver his message, Kacynski’s writing is sticking out in that he doesn’t seem to be holding back. He had a goal with his manifesto and he made sure it wasn’t missed in any poetic or artistic misunderstanding – Leaving no room for any of that in his text production, everything is given to you straight up, with no sweeteners.

Trying to untangle and make clear of societal problems of increase in mental diseases, feeling no progress in our personal live and isolation even with thousands upon thousands of people around us, is one of the main themes of the essay – “There is good reason to believe that primitive man suffered from less stress and frustration and was better satisfied with his way of life than modern man is” – and a structured explanation is given by Kaczynski on his view on these things.

The author gives a rational overlook that is very tempting to buy into, paired with a passionate longing for the simple primal man’s way of life in pockets of his writing.

“Among the abnormal conditions present in modern industrial society are excessive density of population, isolation of man from nature, excessive rapidity of social

change and the breakdown of natural small-scale communities such as the extended family, the village or the tribe” – Theodore Kaczynski

In a way, it is very preachy, demanding that you agree to what is written for any value to be had from some chapters and paragraphs, particularly when Kaczynski goes off on the ‘leftists’ and other groups the author thinks is in need of a stern talk.

The format Kaczynski choose to use for “Industrial Society and its Future” is setting up an example of something he perceives as bad in society and straight after that, draw a conclusion, most of the time without a thorough explanation for how he ended up at this particular conclusion and some of these conclusions can be dismantled by some critical thinking.

Kaczynski states in one of the closing paragraphs that he might be wrong, that there is a possibility the premise might be false – That is self-consciousness on an extraordinary level in writing (not too sure how it is with that in reality, though).

“People vary in their susceptibility to advertising and marketing techniques. Some are so susceptible that, even if they make a great deal of money, they cannot satisfy

their constant craving for the the shiny new toys that the marketing industry dangles before their eyes.” – Theodore Kaczynski

As a reader, I enjoy hefty doses of cynism and I think I’ve overdosed on that by reading Industrial Society, with sentences like “”In order to get our message before the public with some chance of making a lasting impression, we’ve had to kill people” or even: “People won’t be able to just turn the machine off, because they will be so dependent on them that turning them off would amount to suicide“.

Radical writing is a guilty pleasure of mine and ‘Industrial Society and its future’ gives that in spades, very pseudo-scientific overall, but a unique reading experience. 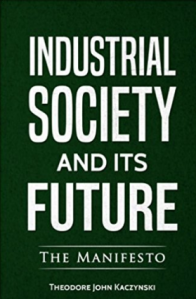 Get it on Amazon and support us at the Utopium

Read it for free at Washington Posts homepage in Web format.